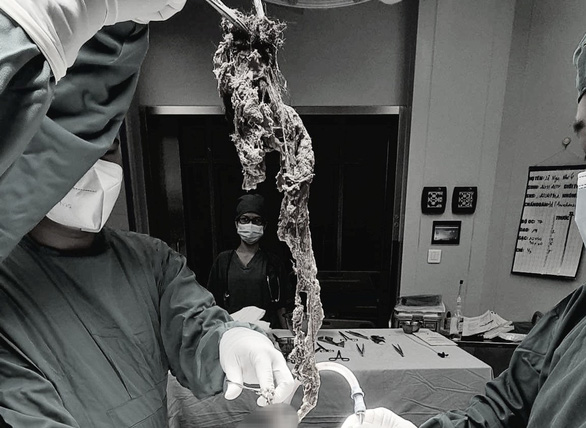 This supplied image shows a long hair mass removed from the bowel of a five-year-old girl by doctors at the Ho Chi Minh City Children’s Hospital.

Rapunzel syndrome is a rare medical condition where hairs the person has eaten become tangled and trapped in their stomach and cause health problems, doctors said.

The syndrome, characterized by a compulsive disorder of pulling one’s own hair and ingesting it, is named after the long-haired girl Rapunzel in the fairy tale by the German authors Brothers Grimm.

Dr. Nguyen Cat Phuong Vu, from the intensive care and toxicology department of Ho Chi Minh City Children’s Hospital, said on Saturday that the hospital had surgically removed a hairball from the bowel of a give-year-old girl in District 8.

The child was hospitalized in the state of persistent dull abdominal pain along with vomiting, diarrhea, and abdominal distension.

The ultrasound and X-ray tests showed that the little girl suffered an intestinal obstruction due to a hairball, which had been created from the prolonged habit of eating hair.

Doctors promptly performed an operation to remove the hair mass from the child’s bowel, Dr. Vu said, adding that this has been the 20th case over the past several years.

Since hair cannot be digested as food when ingested in the body, it leads to a buildup of hairball in the stomach or small intestine and possibly accompanied by a long bun of hair lying along the lumen of the intestine, the doctor explained.

After the surgery, the child was conscious but had some psychological disorders that needed to be treated, he stated.

Similarly, Children’s Hospital 2 has also performed a surgical removal of a giant hair mass from the bowel of a girl at the same age.

The kid had suffered abdominal writhes for five days before being taken to the hospital in the state of diarrhea and vomiting, along with severe abdominal pain.

The hospital has treated such cases of Rapunzel syndrome over the past several years and the number of sufferers has tended to rise in recent times, said Dr. Tran Quoc Viet, at the healthcare activity direction section of the hospital.

Most the affected children experienced surgery to get the hairballs out, and notably, all of them needed to be monitored psychologically for long afterwards.

It is critical that prevention methods are taken after surgery, health experts said.

Parents, relatives and others who directly take care of children play an important role in preventing a relapse of Rapunzel syndrome, doctors stated.

These caretakers should closely monitor children to early detect their habit of ingesting hair and coordinate with health specialists to stop the behavior by proper measures including psychological ones, doctors advised.

The most common reason for recurrence in patients is the lack of follow-up care and incompletion of psychological treatment, according to researchers.

To prevent recurrence of Rapunzel syndrome, parental counseling, neuropsychiatric assessment and treatment, long-term follow-up and behavioral therapy should be performed, according to Journal of Pediatric Surgery at ScienceDirect.com.