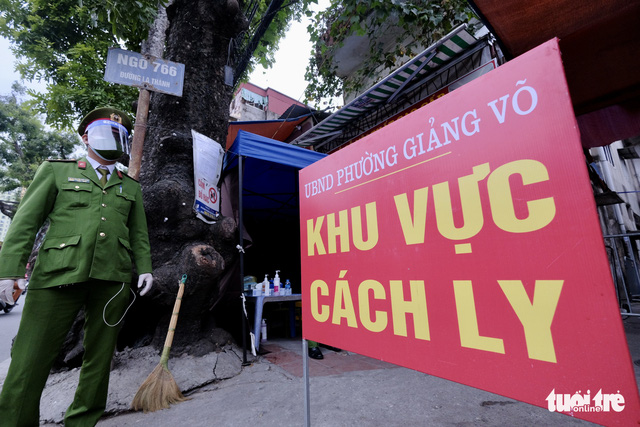 The surge of new COVID-19 infections in Hanoi in recent days has strained local health units, causing delays in giving support to a certain number of patients who are now struggling to find treatment at home through online advice.

Requests for medical advice have constantly poured into an online group managed by medics to provide support for COVID-19 patients at home, as observed by Tuoi Tre (Youth) newspaper reporters.

T.H., whose seven-month-old baby has had a fever, a cough and tested positive for the coronavirus after getting into contact with a COVID-19 patient, said that she could not contact her local medical agency.

H. has been wondering what she should do although her baby’s appetite remains good.

D.V.L., who had one of her six family members in Gia Lam District test positive for the pathogen on December 12, said that it was not until his third attempt that the local medical force took the sick patient to the hospital.

Notably, the infected person had not been vaccinated against the virus due to their underlying diseases.

N.T.H., a resident of Hai Ba Trung District, was not as lucky as L. when three of her four family members caught the virus in the wake of a testing round conducted by health workers in their ward.

H. said the health workers have been out of reach afterward even though she has tried to contact them for transporting her infected 60-year-old mother, who is unvaccinated, to the hospital as she had difficulty breathing.

H. eventually had no choice but to use the ambulance service to take her mother to a private hospital.

“Fortunately, my mother is now being treated,” H. said.

“If I had reacted slowly, I don’t know what her condition would be.”

Meanwhile, H.’s other two sick family members have been treated at home.

“I have mainly relied on information on the Internet to self-medicate and have not received any guidance or care from the local health unit,” H. complained.

Nguyen Thi Trang, a nurse at the medical station of Dong Mac Ward in Hai Ba Trung District, affirmed that there has been a lack of medications for housebound COVID-19 patients.

Trang said that her unit has just started giving COVID-19 treatment pills to local residents after receiving an allocation from the Hanoi Department of Health.

“We’re providing guidance for home treatment for more than 120 patients, which is a large number compared to the medical staff’s capability,” Trang said.

“We can’t talk to every patient over the phone every day.

“We have worked at full capacity and hope for the understanding of the people.”

Medical staff in Dong Da District have also had to multitask due to the increasing number of infections, according to Nguyen Chi Thanh, head of the disease control department at the district medical center.

“Recently, there have been many new patients, while medical staff monitor not only patients treated at home, but also those at quarantine facilities, not to mention tracking new cases,” Thanh said.

“So there has been a dearth of support for some home-treated patients, the number of whom, however, is little.”

The Hanoi Department of Health has not responded to a request for comment from Tuoi Tre.

Hanoi has documented more than 25,800 COVID-19 infections since the fourth virus wave hit Vietnam on April 27, with the number of daily cases on a constant rise, from 1,000 on December 13 to 1,612 on Monday.

Over 6.8 million adults out of eight million people of the Vietnamese capital city have received at least one COVID-19 vaccine shot, with more than 5.9 million of them fully vaccinated, according to the national COVID-19 vaccination portal.