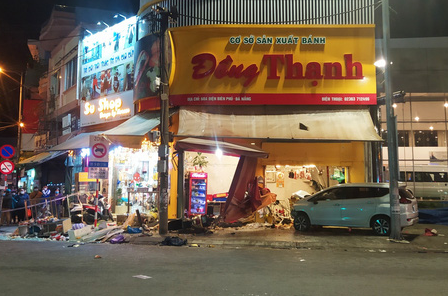 Police in Da Nang said on Sunday evening that they were investigating a case where a seven-seater car crashed into a bakery on Dien Bien Phu Street in Thanh Khe District, injuring six people.

The accident happened at around 6:30 pm on Sunday when the car was traveling on Dien Bien Phu Street in the direction from Da Nang’s center to Thanh Khe District.

The seven-seater vehicle suddenly accelerated near a road tunnel at the intersection of Dien Bien Phu and Nguyen Tri Phuong Streets before making a wide sweeping turn directly into Dong Thanh Bakery at the corner of the intersection.

Videos capturing the car speeding for a few seconds before crashing straight into the bakery recorded by passers-by also went viral on social media.

Functional forces were present at the scene shortly after to regulate traffic and investigate the crash.

Thanh Khe District police said that the accident left six people injured, all of whom have been hospitalized.

An investigation into the case is underway.