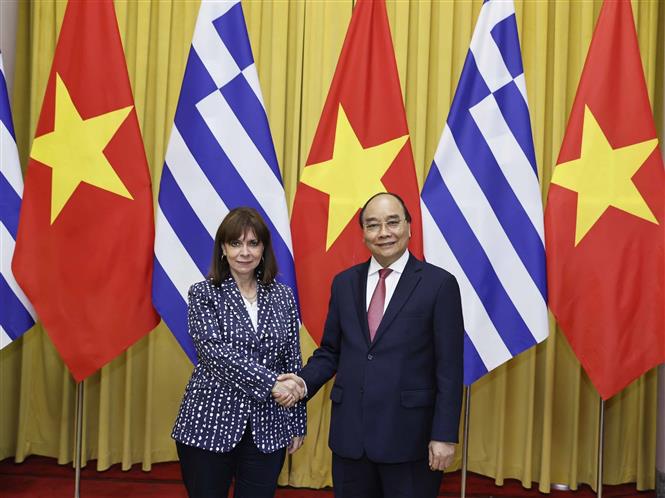 — Vietnamese State President Nguyen Xuan Phuc and his Greek counterpart Katerina Sakellaropoulou agreed on measures to promote the Vietnam-Greece relations during their talks in Hanoi on Monday, the Vietnam News Agency reported.

— Prime Minister Pham Minh Chinh received the CEO of Kohlberg Kravis Robert (KKR) investment company, president and CEO of Visa, as well as CEOs of Citigroup and Standard & Poor’s on Monday morning (local time), as part of his U.S. visit.

— Three children aged four to six drowned after falling into a pond while playing near their homes in southern Binh Phuoc Province on Monday morning, local authorities confirmed later the same day.

— Two men aged 33 and 34 were killed after their car crashed into the railing of a bridge in northern Bac Ninh Province on Sunday night, police officers confirmed on Monday, adding that the victims had attended a party with their old classmates and drunk alcohol prior to the accident.

— More than 2,000 bougainvillea trees planted along the median strip of National Highway 1 in Ho Chi Minh City have been stolen since 2020, according to authorities.

— The Ho Chi Minh City People’s Committee has set a goal to build at least 10 hectares of public parks and two hectares of green space across the metropolis in 2022.

— The chilly weather caused by a cold front in northern Vietnam is forecast to end on Tuesday, and temperatures in the region will begin rising on Wednesday, according to the National Center for Hydro-meteorological Forecasting.

— Police in north-central Ha Tinh Province confirmed on Monday they were hunting for a 39-year-old man who had allegedly murdered a person before escaping into a forest.

— A 64-year-old former storekeeper of a company in south-central Phu Yen Province has been sentenced to 12 years in prison for embezzling more than VND513 million (US$22,200) in 2019.