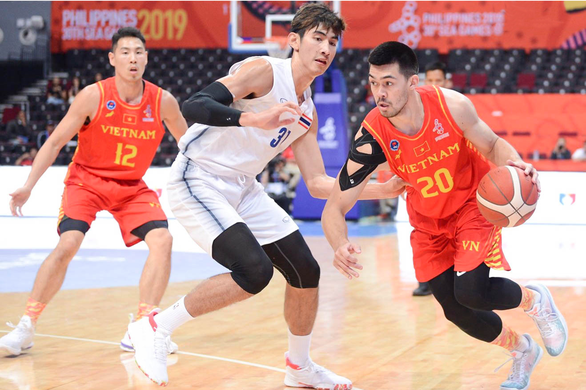 Vietnam, in red, and Thailand clash at a basketball tournament in this file photo provided by VBA.

— Vietnam’s Prime Minister Pham Minh Chinh talked over the phone with China’s Premier Li Keqiang on Thursday, on the occasion of the 72nd founding anniversary of the two countries’ diplomatic ties (January 18, 1950 – 2022), according to the Vietnam News Agency.

“PM Chinh affirmed that the traditional friendship and comprehensive strategic cooperative partnership between Vietnam and China is the top priority in Vietnam’s foreign policy of independence, self-reliance, and multilateralism and diversification of foreign relations,” the agency reported.

— Customs officials in Da Nang said on Thursday that they had seized 6.6 metric tons of elephant tusks and pangolin scales smuggled from Nigeria.

— Ho Chi Minh City will not hold fireworks displays to usher in the Lunar New Year next month, said Vo Trong Nam, deputy director of the municipal Department of Culture and Sports.

— Ho Chi Minh City has received an additional 300,720 Moderna COVID-19 vaccine doses donated by COVAX to administer booster shots to residents, according to the local health department. The city had given about 19 million vaccine doses by Thursday.

— Vietnam’s economic growth is expected to hit 5.5% in 2022, the World Bank said in a press release on Thursday, quoting its economic update for Vietnam ‘Taking Stock.’

— About 20,000 tickets will be sold for spectators to attend the 2022 FIFA World Cup qualifier between Vietnam and China at My Dinh National Stadium in Hanoi on February 1, the Hanoi People’s Committee said on Thursday.

— Vietnam will encounter Thailand, Malaysia, Mongolia, and Tahiti in the pre-qualifiers of the 2025 FIBA Asia Cup, a quadrennial basketball tournament for men’s national teams of Asia and Oceania.