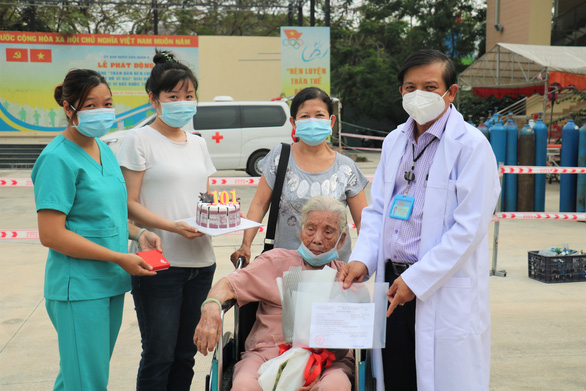 101-year-old Diep Luc (sitting) is discharged from Ho Chi Minh City’s No. 1 Field Hospital in District 8 as she has recovered from COVID-19 after over three weeks of treatment, January 12, 2022. Photo: Cam Nuong / Tuoi Tre

— National carrier Vietnam Airlines has proposed the Civil Aviation Authority of Vietnam allow the resumption of regular international flights to Australia from January 13 to meet passenger demands ahead of the coming Lunar New Year (Tet) holiday.

— Diep Luc, a 101-year-old patient, was discharged on Wednesday from Ho Chi Minh City’s No. 1 Field Hospital in District 8 as she had recovered from COVID-19 after over three weeks of treatment.

— Dozens of doctors and nurses at Tue Tinh Hospital in Hanoi on Wednesday stood in front of the hospital gate with banners asking for their unpaid wages over the past eight months.

— The Automobile Manufacturers Association reported slight growth in the local automobile market in 2021, with its members selling more than 304,000 units, up three percent from the previous year, the Vietnam News Agency said on Wednesday.

— A seminar titled ‘E-commerce in the UKVFTA Agreement – The Key to Promote the Vietnam – UK Trade’ will be jointly held online by the British Embassy Hanoi and Vietnam’s Ministry of Industry and Trade on January 18 to promote the application of e-commerce in export and import activities between the UK and Vietnam, the embassy announced on its verified Facebook page on Wednesday.

— An exhibition highlighting tigers in Vietnam’s ancient art is scheduled to open at the Vietnam National Museum of History from January 18 to August 31, the Vietnam News Agency quoted the museum as saying on Wednesday.

— Authorities in the Mekong Delta province of Dong Thap have recently allowed ninth and twelve graders to come back to school from January 17 while other grades still stick to online studying until late this month.

— A car bomb exploded on a road leading to the airport in the Somali capital Mogadishu on Wednesday, killing at least eight people, Reuters cited the head of the city’s ambulance services as saying.