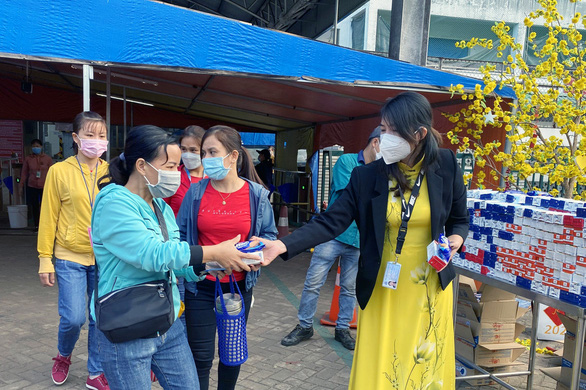 — Based on Hanoi’s current COVID-19 safety level, local authorities have allowed 118 bus routes in the capital city to operate at 100 percent of their capacity beginning Tuesday, instead of 50 percent previously.

— More than 50 public servants in the Central Highlands of Dak Nong were found on Monday infected with COVID-19 after the recent Tet (Lunar New Year) holiday.

— More than 5,000 workers at a leather shoe manufacturing company in the north-central province of Nghe An staged a stoppage on Monday to demand higher wages on the very first day they went back to work after Tet.

— Vietnam Airlines has planned to arrange some 200 more flights from Monday to Thursday to meet passengers’ rising demand for traveling to the southern region following the end of the traditional Tet holiday, the Vietnam News Agency reported on Monday.

— Around 94 to 95 percent of employees in the southern province of Dong Nai have returned to work at local enterprises after the recent Tet holiday, the provincial labor confederation said on Monday.

— Hanoi decided on Monday to reward the Vietnamese women’s national football team with VND1 billion ($44,118) for their victory against Chinese Taipei in the play-offs of the 2022 AFC Women’s Asian Cup in India on Sunday, which won Vietnam a first-ever ticket to the 2023 FIFA Women’s World Cup.

— Hanoi’s Department of Education and Training said that students from grades first to sixth in 12 inner districts are expected to return to offline schooling on February 21.