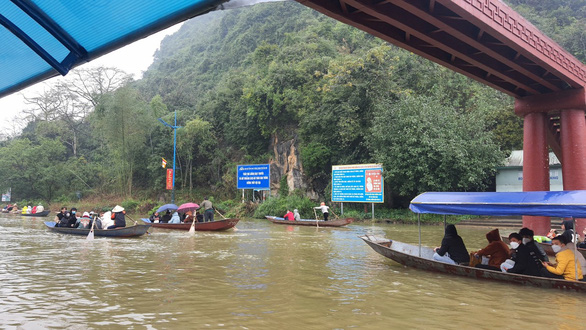 — Vietnamese State President Nguyen Xuan Phuc received a credential from the newly-appointed ambassador of the U.S., Marc Evans Knapper, in Hanoi on Friday.

— One member of a family in north-central Thanh Hoa Province died and another was hospitalized after inhaling toxic fumes from the honeycomb briquettes they were burning to stay warm on Friday.

— The Huong Pagoda in Hanoi’s My Duc District welcomed 1,550 visitors on Friday as part of its pilot reopening day ahead of the Huong Pagoda Festival, which will start on February 16.

— Karaoke parlors, discos, massage facilities, bars and internet shops will reopen in Ha Long City, northern Quang Ninh Province, at noon on February 16 after a 10-month closure due to the COVID-19 pandemic.

— Police in Ho Chi Minh City announced on Friday the arrest of a 33-year-old man who stole two motorbikes within an hour from a boarding house in Binh Chanh District earlier this week.

— The Vietnam Olympic Committee gave the Vietnamese national men’s football team VND3.6 billion (US$158,677) in rewards for their victory against China in 2022 FIFA World Cup Asian qualifier in Hanoi on Tuesday evening.

— A ghost village that has emerged as drought has nearly emptied a dam on the Spanish-Portuguese border is drawing crowds of tourists with its eerie, grey ruins, according to Reuters on Friday.