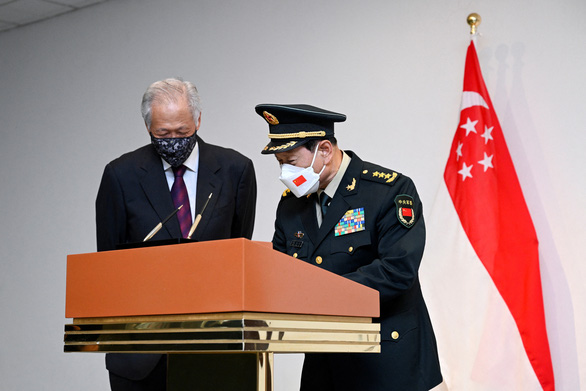 China is expected to show its assertiveness at this year’s Shangri-La Dialogue amid the multiple crises facing countries across the globe, experts said.

The 19th Shangri-La Dialogue is scheduled to take place from June 10 to 12 in Singapore after two prior cancelations due to COVID-19.

Peter Layton, visiting fellow at the Griffith Asia Institute in Australia, told Tuoi Tre News that this year’s dialogue comes at a time of multiple crises.

For the U.S., its allies, and close friends, the meeting will be viewed through the lens of the war in Ukraine. However, the major concerns still linger over China and its continued assertiveness in diplomatic and military domains.

Layton said Chinese actions are now assessed much more negatively by the West compared to in the past, though it is not apparent China understands this.

It is likely that China’s wolf warrior diplomacy makes it difficult for Chinese leaders to understand the perspective of other nations.

In terms of its relationship with Australia, China’s Foreign Minister has just suggested a reset in China-Australia relations in order to facilitate a return to times of harmony. This contradicts China’s aggressive responses to Australian military aircraft in the East Vietnam Sea.

“China’s extension of the hand of diplomatic friendship while being hard-nosed elsewhere appears the way China today does business,” Layton remarked.

China’s use of ‘stick and carrot’ diplomacy is at odds with conventional diplomatic norms. While China may like this approach, it often disturbs other states and creates real pushback against Beijing.

The latest example of such pushback has been in Europe, where China’s diplomatic efforts with European nations and the EU have been unsuccessful because of this carrot and stick approach. It’s still not apparent if China will change or if it even comprehends why it is failing to win hearts and minds.

“Given this, China at the Shangri-La Dialogue is likely to be assertive,” Layton said.

Chinese Minister of National Defense Wei Fenghe will deliver a speech on regional order but he is unlikely to mention the war in Ukraine or its global impacts on energy prices and food security.

As for U.S. Defense Secretary Lloyd Austin, he will probably draw parallels between the Ukraine conflict and China’s grey zone actions in other areas.

While not slated to give a formal presentation, Indian attendance at this year’s Shangri-La Dialogue will be interesting due to the fact that India is an outlier in the Russia-Ukraine military conflict.

The U.S. press at the Shangri-La Dialogue is likely to carefully monitor any comments made by India.

Similarly, the U.S. press will likely keep an eye on statements made by ASEAN member countries regarding the war in Ukraine.

Sharing his view, Lucio Blanco Pitlo III, a research fellow at the Asia-Pacific Pathways to Progress Foundation in the Philippines, said China’s desire to ink security pacts with Pacific island states stoked fears among traditional Indo-Pacific powers that Beijing may be seeking strategic access or to build bases which would alter the regional balance of power.

According to Bilahari Kausikan, a former permanent secretary in Singapore’s Ministry of Foreign Affairs, the effects of the war in Ukraine will be a major focus in this year’s Shangri-La Dialogue, alongside U.S.-China competition.

It is not clear how tense the relationship will be between the U.S. and China at the event while both U.S. Secretary of Defense Austin and Chinese Minister of National Defense Wei are in attendance.

“The substance of the competition has not changed since it was bolstered under the Trump administration,” Kausikan said.

Robert Ross, a professor of political science at Boston College in the U.S., said that for every country in the region, the U.S.-China competition is important and all sides are paying close attention.

In the East Vietnam Sea, Beijing appears concerned that Washington is interfering and intervening in sovereignty disputes between China and other countries.

At the same time, the U.S. is concerned that China is using its navy and coast guard to carry out coercive activities against other countries.

Dr. James Nolt, a professor at New York University in the U.S., stated that he does not believe that U.S.-China tensions are particularly high at the moment.

There is some heated rhetoric being used by both sides for domestic political reasons, but it is of no real significance. Both China and the U.S have major political events this November: the National Congress of the Chinese Communist Party (held once every five years) and the national midterm elections for Congress in the U.S..

Consequently, there is considerable posturing, along with hints from both sides, that the world’s two largest economies must settle their economic differences this year.

Several U.S. officials have hinted that Washington is considering eliminating most of the extraordinary tariffs on Chinese imports that were imposed by former U.S. President Trump in 2018.

Because there is a global recession underway, it is economically useful for these major economic powers to ease the trade obstacles.

It is not certain, however, if this will be possible given the political distractions of the year.

Vice Admiral Yoji Koda, former commander in chief of the Japan Maritime Self-Defense Force, expressed his hope that country representatives at the Shangri-La Dialogue will discuss the real causes of the conflict in Ukraine rather than the fight itself.

Ross said that country representatives will finally be able to meet in person at the dialogue after two years of cancelation.

They will have the opportunity to reopen channels and see colleagues and diplomats from different countries. This will help them identify who to call and who to talk in the time to come.

Ross expects that leaders from around the region will have the chance to hold informal bilateral meetings.

In particular, the public may see a meeting between the U.S Secretary of Defense and the Chinese Minister of Defense.

“That makes it easier for countries to manage and promote diplomatic efforts,” Ross said.

Kausikan noted that it is good for country representatives to meet each other in person as it might help to reduce the risk of miscalculations.

In particular, he mentioned the case of a Chinese fighter jet intercepting an Australian plane in the East Vietnam Sea in late May, adding that some rules of engagement will help to prevent similar dangerous incidents.

Koda said the meeting between the U.S. Secretary of Defense and the Chinese Minister of Defense “could be a good thing.”

Pitlo expressed his hope that major powers and disputants revisit and test communications and crisis management mechanisms “or they will be established when there is none to prevent untoward incidents from sparking a conflict nobody wants.”