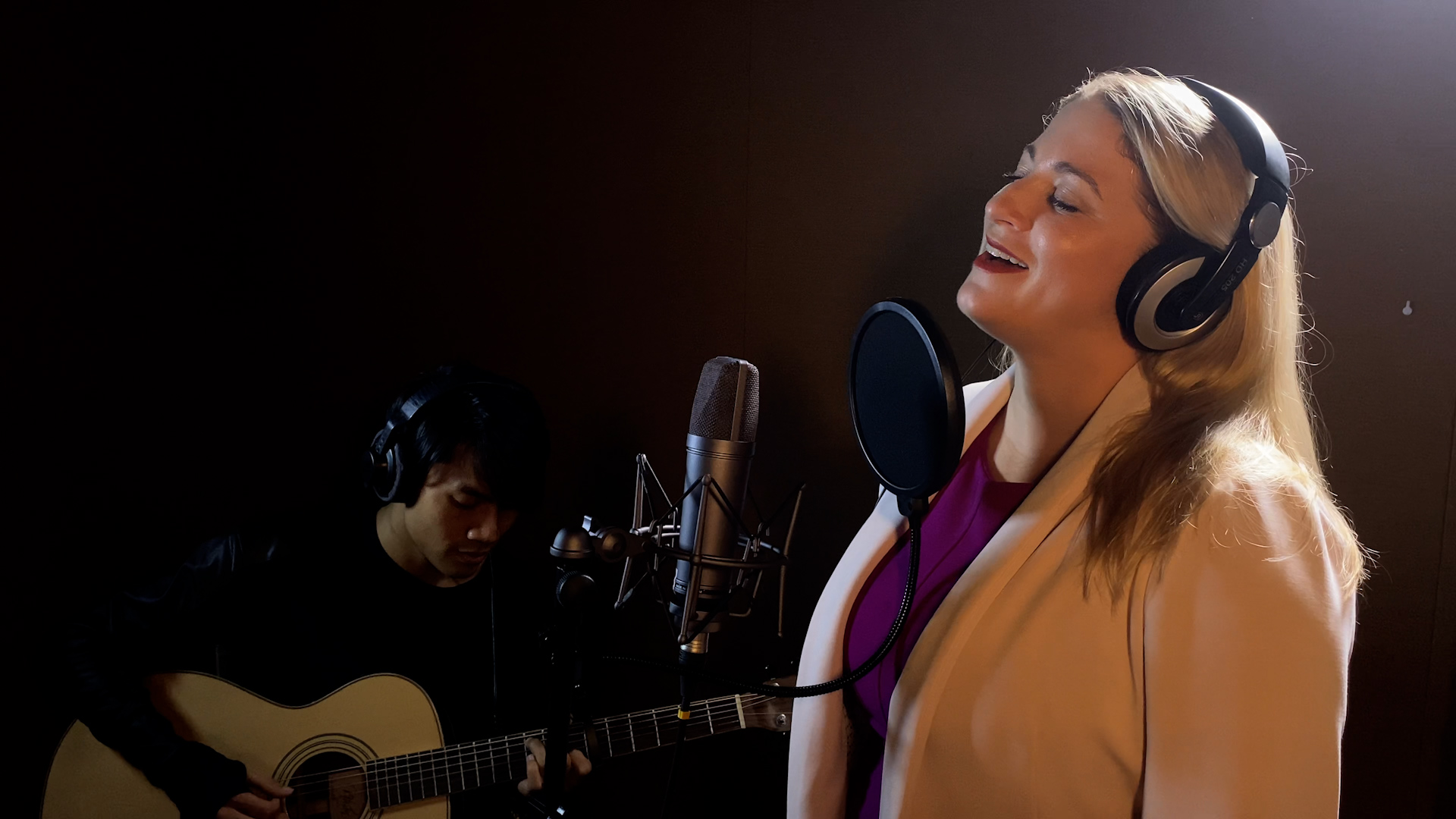 Kate Bartlett in a photo provided by the U.S. Embassy in Hanoi.

A video of Kate Bartlett, an American diplomat from Florida, singing a popular Vietnamese song, “Bui Phan”, for the Teachers’ Day, an annual celebration on November 20, has become viral as it was posted online two days ago.

Bartlett is currently a Cultural Attaché at the Public Affairs Section at the U.S. Embassy in Hanoi.

Recently, Bartlett had a chat with Tuoi Tre (Youth) newspaper about the surprise public attention she has received.

“I think the reason it went viral is that it shows everyone’s common love for teachers,” Bartlett said.

“This is a very universal topic, to love and respect teachers. And it’s just we all feel this.

“And so I think, maybe the song kind of touched us all, because we have that common love for teachers.”

Can you tell us how you practiced the song?

Well, I would say it was a long process. It’s not like I woke up in the morning and said “I’m going to sing the song”. It required a lot of effort. So first, I had to make sure I understood all the words. Because there are a lot of words in the song I didn’t know, like “Bụi phấn” (Chalk dust). When I sat with my teacher, I asked questions about what it all meant, and she explained it to me.

But after I understood the words, I had to memorize them. So I would go walking around my neighborhood, and I would try to say them while thinking about the words in my head. I would make a mistake, and then I would just keep memorizing.

The challenge for me, for sure, is pronunciation. I am always struggling with pronouncing words properly in Vietnamese. Sometimes, when I talk, people don’t understand me. So I have to fix my pronunciation.

The joyous part was that we decided to do an interpretation for the second part of the song. The first part, we tried to keep it quite traditional to show how serious the subject of education is and show respect to teachers. With the second part, we decided to make it a little more playful and joyful to show that education is fun and it brings hope.

You speak Spanish, Bahasa, Romanian, Iranian and Vietnamese fluently. Is it work or something beyond work that inspired you to learn Vietnamese?

It’s a lifelong process. I don’t know if I speak any language fluently, including English maybe. Because I think that we’re always learning new ways of grammar, new ways to express ourselves. All of the languages I’ve studied are because I lived in those countries. I use these languages to work, make friends and go to the market, you know, just for daily life.

For Vietnamese, my initial reason for learning was also for work. Because the embassy believes that it’s important to learn a local language, so you can communicate with people. Because then you can speak to people more clearly, and you can understand each other better. And I think it also makes an impression on people because when you use their language, they feel like you respect them and their culture.

So at first, it was because of work. This was my job. But then after arriving in Vietnam, I was motivated to continue studying. I hear people talking around me in the market, at the coffee shop, etc. and then I wonder what they’re saying because they speak too fast. So it made me want to study more.

Can you tell us about your work?

In the field of culture, right now, we’re working on cooperating with the Vietnamese government, and different non-governmental organizations to promote Vietnam’s unique cultural heritage. Everybody knows Vietnam is a very special country with a long history and a lot of culture. That’s why the tourists are so interested in coming here. We want to help Vietnam preserve that culture to make sure that it continues to get passed down from generation to generation. We have a program called the Ambassador’s Fund for Cultural Preservation. This is like a competition. We are working to try to make sure that hopefully, a Vietnamese site will be chosen this year. In 2018, a grant of US$92,500 to conserve the stone vault and the south gate of the Ho Citadel in Thanh Hoa Province was granted.

How did education impact your current career as a diplomat and the person you are now?

And now it’s exciting because in my career as the cultural affairs officer, I work on culture, education, and exchange programs. And I like to think that I’m helping other people realize their dreams as well, by allowing Vietnamese students to go to the United States on programs like Global Undergraduate Exchange Program (Global UGRAD) ​​and Fulbright, and then giving American students opportunities to come to Vietnam on programs like Fulbright. I think these kinds of educational opportunities open doors.

Kate Bartlett sends greetings on the occasion of Vietnam Teachers’ Day (November 20) and her performance of the song ‘Bui Phan’. Video: U.S. Embassy in Hanoi

During your education, who had the most impact on your life and what was that impact?

When I was young, like in kindergarten, maybe at the age of five, I would say there was a teacher that impacted my life very much. Because she helped me realize my identity. She helped me understand who I am as a person.

When I was young, I was always trying to be clever or mischievous, and I did not sit still like other children. I was not a good little child like all other students, and I feel like I was just playful.

And one of my teachers decided to spend some time with me and understand why I was behaving this way, how my attitude was. She took me out to lunch, and she paid for my lunch on a weekend on her own time with her own money. And I’ll never forget.

She took me to Burger King and bought me a little bucket with the meal inside. And she spent some time getting to know me. She helped me to understand it’s very important to sit still and listen in class. She helped me realize that maybe I was not a bad student and I just needed to improve my behavior.

I listened and I understood that. She made me want to be smart and want to learn. She told me “Hey, I think you’re very smart. I think you can learn a lot, and you can achieve a lot. But you have to sit still to do it”. After that time, my behavior improved and I became very interested in my lessons.

She kind of changed the course of my life, even at such a young age. She gave me a love for learning and made me interested in lessons. And, you know every year after that, I wanted to get better and smarter and read more and learn. And I think that’s a beautiful thing. And actually, even now, many years later, I still keep the bucket that she bought for me at that Burger King.

And I just think it’s a symbol of the teacher who took time out of her busy schedule to invest in one of her students. Because she saw that the student needed a little bit of help going in the right path. And I think that’s just beautiful.

In the next three to four years with your job in Vietnam, what is your plan to explore the country?

I’m looking forward to exploring the country and getting to know Hanoi and all the different regions.