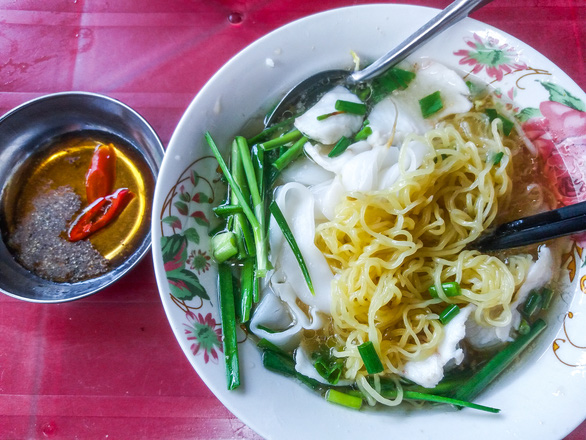 Whether it is a weekend or weekday, the elderly couple who run the Phat Map hu tieu mi stall in downtown Ho Chi Minh City serve up bowls of steaming hot noodles at 5:00 am on the dot, just as they have been doing it for the past seven decades.

The stall, located at 108 Bis Calmette Street in District 1, Ho Chi Minh City has been in the business of serving noodles for more than 70 years.

When the stall first opened, it stuck to early morning hours, but overcrowding and high demand convinced the owners to dish out noodles from 5:00 am to 11:00 am every morning.

Despite the extended hours and three to four employees on hand at the stall, meeting the high demand for the Phat Maphu tieu mi is still a challenge.

The speciality dish at Phat Map is hu tieu mi ca (white rice noodles mixed with golden egg noodles topped with fish), but diners can also enjoy the hospitality and nostalgia that flow from the stall.

With its modest tables and plastic chairs, the store’s atmosphere inspires an air of wistfulness.

The highlight of the store, however, is the traditional Chinese-style kitchen furnished with shabby paving bricks, cooking utensils, neatly organized fresh noodles, and a pot of delectable soup.

They do not become mushed together when mixed with mi (golden egg noodles) which, in turn, create a chewy and pleasant taste when combined with cripsy garlic chives and bean sprouts.

In addition to deboned snakefish, Phat Map hu tieu mi sells pork liver, pork kidney, pork rib, pork, minced pork, and other items to ensure that customers have a variety of options at their disposal.

Vistors to Phat Map often have a long wait for their noodles, and it is not uncommon for the stall to sell out while customers still wait in line.

The stall’s broth alone is relatively bland, the owner frequently adds spices to each bowl, which combines in harmony with the broth’s sweetness.