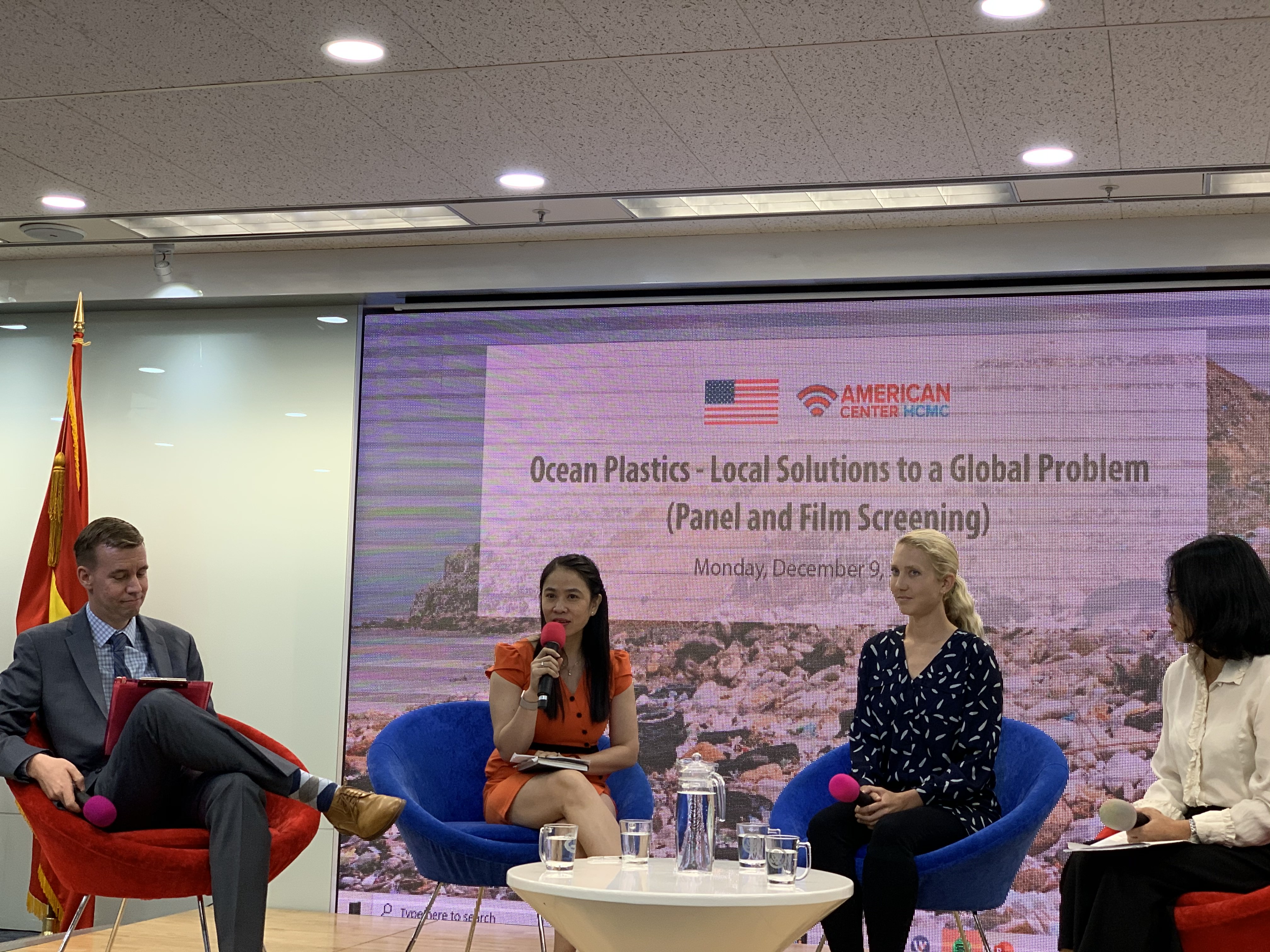 An American social-ecologist offered her insights into the effects of ocean pollution on fishing communities around the world, including Vietnam, during a panel discussion following a screening of environmental documentary ‘Trashed’ in Ho Chi Minh City on Monday afternoon.

The American Center, run by the U.S. Consulate General in Ho Chi Minh City, hosted a screening of the feature-length documentary followed by a panel discussion on December 9 as part of an effort to address the global challenge of saving the ailing oceans.

First released in May 2012, ‘Trashed’ follows Oscar-winning actor Jeremy Irons around the world as he explores several destinations that have been hit particularly hard by ocean pollution, including Sidon – the third-largest city in Lebanon, the Gulf of California, and Plymouth – a port city situated on the south coast of Devon in England.

In Sidon, a mountain of household garbage towering 40 meters high is wreaking havoc on the Eastern Mediterranean.

Meanwhile, micro-plastics are having devastating effects on Plymouth and its fishing community which depends on local selfish.

Thousands of miles away, in the Gulf of California, oceanographer Charles J. Moore is using his work to demonstrate the negative impacts of the Great Pacific garbage patch of plastic, chemical sludge and other waste on the sea life and the food chain.

A panel discussion following the screening was hosted by Emi Koch, a social-ecologist and multimedia storyteller from California, Linh Nguyen, the country manager for the Environment and Development Action (ENDA) Vietnam since 2013, and Bui Thi Thu Hien, the coordinator of the International Union for Conservation of Nature (IUCN)’s Marine and Coastal Program.

Stories through the ‘local lens’

Like the production team of ‘Trashed,’ Emi Koch uses her work to shed light on the plight of coastal residents.

Currently a Fulbright-National Geographic Digital Storytelling Fellow 2019-2020, Koch has finished a photography workshop with a Vietnamese partner called My Day, engaging youth in Mui Ne in the south-central province of Binh Thuan in sharing their lives and the issues they face such as plastic pollution.

She also runs similar initiatives in other developing countries, such as Peru and India.

“It’s not me as a foreigner residing in a community to tell you about the stories of that community. We’ve done that for long. Now it should be the local communities who [develop] the techniques and the platforms to share their own stories,” Koch said during the discussion.

As part of her work, her team provides fishermen in coastal Vietnamese provinces with cameras so that they can document their daily lives and how they are affected by environmental issues.

One of these photos, taken by a fisherman from Mui Ne, was presented at Monday’s discussion.

In the photo, the man shows off his fishing net after a long day’s work. Unfortunately, all he has to show for his efforts are five fish and a pile of plastic.

Koch also used the discussion to remind attendees that one-third of megacities around the world are located in coastal regions so, as these cities continue to develop and expand, it is integral that they find a way to stay connected to the environment.

“As the cities have developed, we’ve sort of become detached from the environment itself but still rely on ecosystem services,” she said.

Sharing her thoughts on the immediacy of these issues for coastal dwellers, Koch offered up a story about a Thai woman she met who lost her house to rising sea level.

“I asked her what she thought was causing sea level to rise and she said it was because on a neighboring island people were dumping too much plastic into the sea. And so the ocean water was rising. And that’s why it took away her house,” the American social-ecologist said.

“So what I mean by that is that we as humans are kind of procrastinatory and we tend to see a problem as ‘out of sight, out of mind’ until it’s in our face,” she explained.

Despite drawing such a bleak picture of the realities facing the oceans, Koch seemed hopeful about the progress made toward creating awareness for the issue.

“A lot of the kids that we work with have baseline knowledge of what a clean environment is,” she affirmed.

She also shared her belief that future generations will lead the way in changing behaviors toward the environment.

“In Mui Ne, I’m working with a sailing center to offer workshops on how to refuse [to use plastic], reuse, and repurpose at the end of every sailing lesson,” she said.

“I do think if you start with the kids, then there’s some hope,” Koch underlined.

Koch plans to continue traveling across Vietnam until July 2020, running workshops and hosting discussions along the way.

A public beach on Tran Hung Dao Street on Phu Quoc Island, off the southern province of Kien Giang, is captured in December 2019....
Read more
Business

A consumer makes a payment by scanning a QR code on a smartphone at a store in Ho Chi Minh City. Photo: Quang Dinh...
Read more
Business