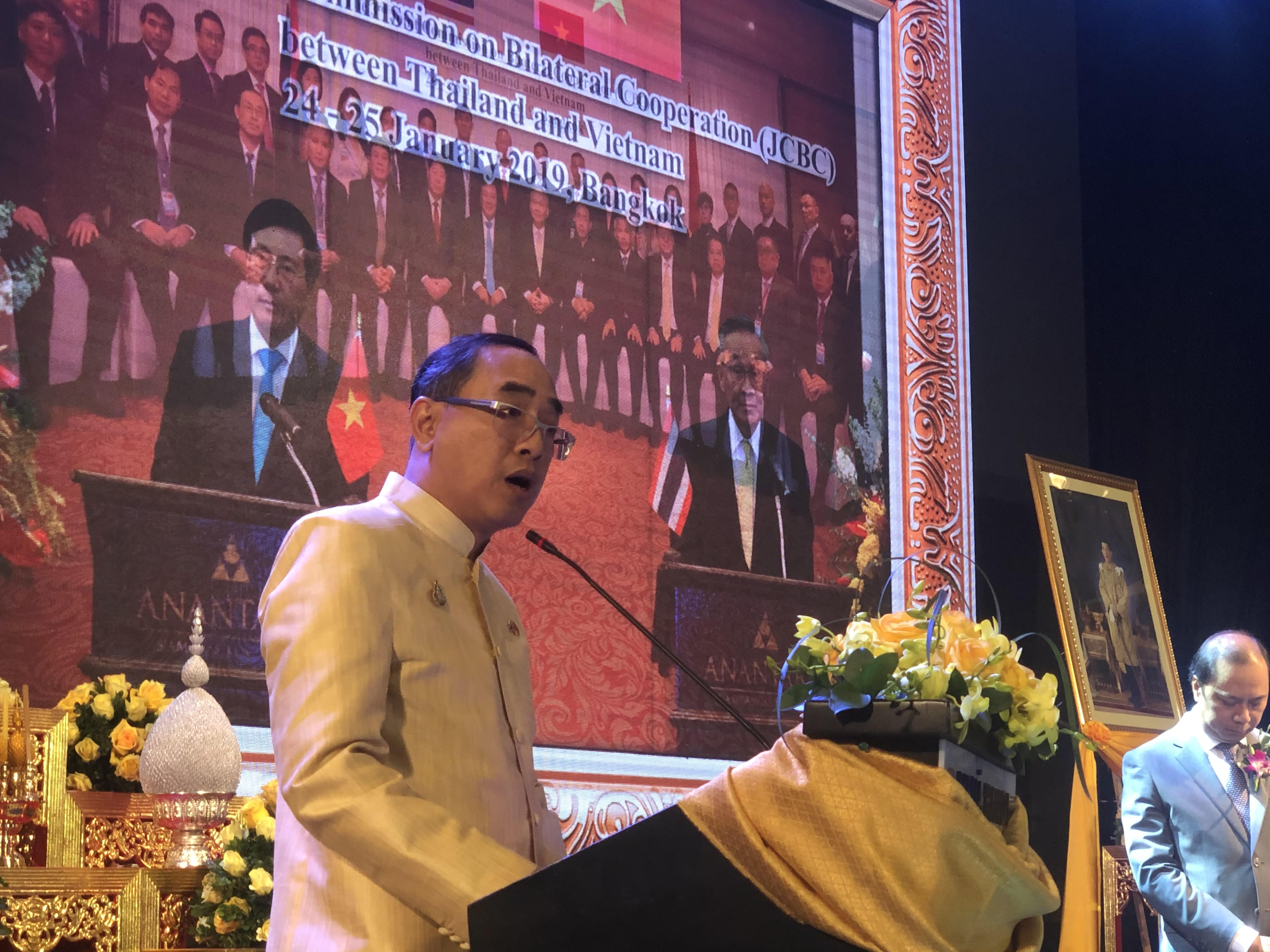 Tanee Sangrat, Ambassador of Thailand to Vietnam, speaks at an event in Hanoi on December 3, 2019. Photo: Nhat Dang / Tuoi Tre

Thai Ambassador to Vietnam Tanee Sangrat says he will be rooting for Vietnam if Park Hang Seo and his men qualify for the 2022 FIFA World Cup in Qatar.

“If Vietnam qualifies for the 2022 World Cup, I will be your supporter,” Ambassador Tanee said in his remarks on Tuesday.

“But if Thailand qualifies, I hope you will support Thailand, too.”

Vietnam and Thailand are in Group G of the 2022 FIFA World Cup Asia Qualifiers.

The Vietnamese are leading with 11 points after five games, while Thailand place third with eight points.

The archrivals have played two games against each other in the second qualifying round, both of which ended in goalless draws.

The under-22 football teams of both countries will also face each other on Thursday for a berth in the semifinals of men’s football at the ongoing 2019 Southeast Asian (SEA) Games in the Philippines.

Ambassador Tanee expressed his acknowledgement that Thailand’s national and under-22 football teams are not really in form, and they are no longer the region’s dominant power.

“Everybody can win. Vietnam, Indonesia or Thailand,” he told Tuoi Tre News, referring to the possibility of any team advancing to the semifinals of men’s football at the 2019 SEA Games.

Tanee gave his speech as Thailand celebrated the Birthday Anniversary of His Majesty King Bhumibol Adulyadej the Great, The National Day of the Kingdom of Thailand, and Thailand’s Father’s Day in Hanoi on Tuesday.

Hundreds of guests, including representatives from the Vietnamese Ministry of Foreign Affairs and other embassies, were in attendance.

Speaking at the ceremony, Ambassador Tanee said he holds in high regard the cordial relations between Thailand and Vietnam.

“Long before our two countries established diplomatic relations 43 years ago, we had enjoyed friendly ties spanning many generations,” he said.

“The late President Ho Chi Minh lived and carried out revolutionary activities in Thailand in 1928-1929.”

“His footprints are visible across the country, from Bangkok to the northern and northeastern provinces of Thailand,” Tanee said.

The flourishing Vietnamese-Thai community of 100,000 people with remarkable economic and educational achievements in Thailand is a strong foundation of friendship between Thailand and Vietnam, he added.

In terms of investment, Thailand is now the ninth-largest foreign investor in Vietnam with a total accumulated investment value of US$10.8 billion from more than 500 projects across the country.

“Looking forward, I am confident that the Strengthened Strategic Partnership between Thailand and Vietnam will become even closer, a true partnership that we can rely on in good and challenging times,” he said.

“Our economic relations continue to grow from strength to strength.”

Thailand is Vietnam’s largest trading partner in ASEAN and fifth-largest in the world, with two-way trade totaling $17.5 billion last year, according to the ambassador.

A host of trade promotion activities including Top Thai Brands, Thai Festival and Mini Thailand Weeks have been organized by trade offices and the Thai Embassy in Vietnam throughout the year, he said.

“We hope to achieve the $20 billion [trade] target next year, and our two prime ministers have already set the target of $30 billion by 2025,” Ambassador Tanee said.

“Trading relations between us are thriving indeed.”

Gamers and visitors take a rest at the booth of Netflix during Europe's leading digital games fair Gamescom, which showcases the latest trends of...
Read more
Entertainment